True double vision after retinal detachment surgery can happen, but is uncommon. Usually large changes in prescription are the culprit. 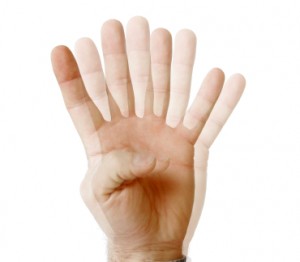 Scleral Buckle May Cause Diplopia

A common method to fix a retinal detachment involves the use of a “scleral buckle.” This involves placing an element, usually silicone rubber, on the outside of the eye and underneath the eye muscles.  The visual effect of a scleral buckle is an increase in myopia (nearsightedness) and/or astigmatism. 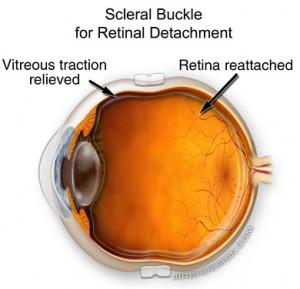 At times, manipulation of the eye muscles can cause true double vision.  The muscles may get injured or impaired such that the eye does not move in coordinated fashion with the other eye.  Diplopia can occur with this muscle imbalance.

Why?  Inherent to large changes in prescription is a change in the actual size of the image that we see.  Thus, with large changes, the brain actually sees two images of different sizes.

With anisometropic double vision, one see double because the images are too different for the brain to make into one (this is, in part, why we get depth perception, the two eyes gives us slightly different views of the same image).

This is probably the most common cause of “double vision” after retinal detachment surgery.

Cataracts Can Cause Diplopia

Gas is commonly used to repair a retinal detachment.  A common side effect of intraocular gas is the hastened formation of a cataract.  This, too, can change the prescription of the eye pretty dramatically.  “Double vision ” can result from cataract formation by causing a strong shift in the prescription and by physically altering the light as it comes into the eye.

Many cases are actually caused by changes in the prescription, either due to physical changes of the due to the scleral buckle, or, due to advancing cataract.

Happily, most cases can be fixed.  If the retina is functioning well enough for the double vision to be “seen,” then it’s likely corrective measures can be taken.

Specifically, eye muscle surgery can help if there are true muscle problems, whereas cataract surgery or correction with a stronger contact lens may be helpful, too.