A "Toy Story"…………Stories that Blind

"Cross My Heart, Hope to Die, Stick a Needle in My…"

A "Toy Story"…………Stories that Blind 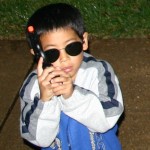 Paintball – I hate this one.  A compact canister fired at a high rate of speed.  The fancier the gun, the faster the projectile.  These things even can even travel around corners!  The size of the paintball is a perfect fit between your brow and cheekbone.  Thus, ALL the force is absorbed to the eye.  I think the safety/protection is satisfactory, but the accidents happen “off the field” when the players are not expecting a shot to be fired.

I had a 14 year boy several years ago who developed a retinal detachment, had surgery and still went blind.  The impact of the pellet was so severe, it detached his retina and severed his optic nerve.  The other problem with paintball is that the age group is old enough to know right from wrong and may lie to conceal the truth to avoid punishment.  Had I originally known a paintball was involved, we might have approached him differently.

Pocket Knife – I know many people that carry them for small odd jobs around the house; cutting string, small screw drivers, etc. 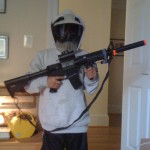 Then there was this “kid,” who tried to see how many times he could throw his knife and get it stuck into a tree.  The knife bounced off the tree and landed in his right eye.  The tip of the knife went right through the center of the cornea.  While his retina never detached, the knife cut his natural lens and ruined his cornea.  He needed a corneal transplant, removal of the damaged lens and a possible implant.  He’ll need life long follow up.  The “kid” was 19.

BB Gun – Believe it or not parents, BB guns are either fired on purpose at a “friend” or go off accidentally.  I have had several cases (the term we substitute for “patients”) where the BB went directly into the eye.  Most times it doesn’t penetrate the eye, but can still cause permanent damage.

Blood can fill the front of the eye and is called a hyphema.   My 12 year old boy developed a cataract and is at lifelong risk for developing glaucoma; all due to the trauma.

The kids don’t think that these low-speed projectiles are dangerous and don’t bother to don safety glasses.  They usually don’t even penetrate the skin, so the feeling is these are “safe.”

I have no opinion about “Air Soft.”

“Nerf Gun” That spongy material that has been around for generations can be blinding.  My worst “toy story” is the kid who shot a Nerf dart at a friend.  The Nerf dart had a suction cup at one end which was designed to stick to flat surfaces (e.g. window, refrigerator door, etc.).  This guy modified the suction cup with a straight pin.  I don’t think he meant it to get stuck right in his buddies eye.  They were 9 years old.

The right eye of our little patient has now undergone at least 5 retinal surgeries.  The cornea may need replacing soon due to the original accident and repeated surgeries.  The visual potential?  Legally blind, at best.

We have five kids.  Our only rule – no real guns.  They are the same ages of everyone one of my stories.

We have everyone one of the “toys” listed above except the high-velocity paintball guns.  We encourage them about safety (especially eyes).  We encourage them to have fun with their toys and to use them as they were meant to be used.  We try not to over control.   Accidents will happen.