Tips On Choosing an "Eye" Doctor: A Retina Specialist?

If you remember, this is the most common stage of diabetic retinopathy.  Almost every patient with diabetic retinopathy develops some leakage in the macula, potentially causing decreased vision.  The normal retinal blood vessels develop tiny little blebs along the blood vessel walls.  Theses outpouchings are called “microaneurysms.”  We know, and can prove, using fluorescein angiography, that these microaneurysms leak both blood and the clear, fluid part of blood.  “Focal” laser is presently the treatment of choice for diabetic macular edema. 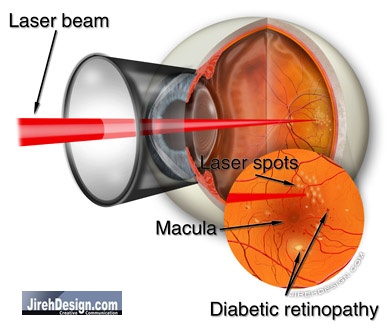 A small lens is placed on the surface of the eye.  The laser does not hurt, is performed in the office and takes less than 10-15 minutes.  The idea is to treat the microaneurysms near the macula, but not the actual macula.  Treating the actual macula will cause permanent blind spots in your vision (not good).

It may take several months to determine if the laser was successful.  There is no care needed after the laser is performed.  It will most likely need to be repeated some day.

Treating the leaky microaneurysms is like weeding a garden, new areas will crop up.

When the retina becomes ischemic, it releases a protein called Vascular Endothelial Growth Factor (VEGF).  The vascular endothelial growth factor (VEGF) causes abnormal blood vessels (neovascularization) to develop on the surface of the retina and on other parts of the inside of the eye such as the optic nerve and iris.

Blindness may develop from massive proliferation of the neovascularization (aka abnormal blood vessels) causing either retinal detachment or, a rare type of painful glaucoma (neovascular glaucoma – NOT the regular glaucoma). 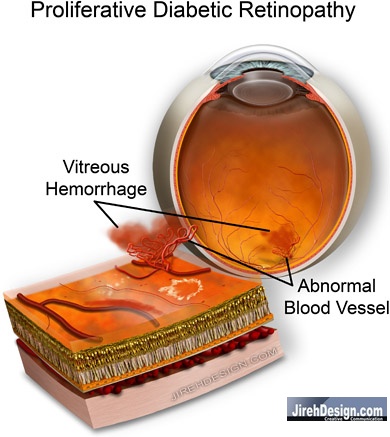 In the illustration above, neovascularization has developed on the surface of the retina.  These abnormal blood vessels have also broken and bled causing a very small vitreous hemorrhage.  This blood may be seen as sudden floaters, or if large enough, may block most of the light from hitting the retina, causing significant loss of vision.

So far, ischemia has caused vascular endothelial growth factor (VEGF) to be liberated.  The VEGF has caused neovascularization to develop.

If we laser the peripheral retina, the portion of the retina away from the macula, we can stop the production of VEGF in most cases and arrest the proliferative phase of the diabetic retinopathy.

In effect, we are killing small portions of the peripheral retina with each laser pulse. Since we (scientists and other smart guys) are unable to increase oxygen supply, we must decrease demand.  The “ischemia” is over, VEGF production stops and the neovascularization goes away.  Disease process halted! 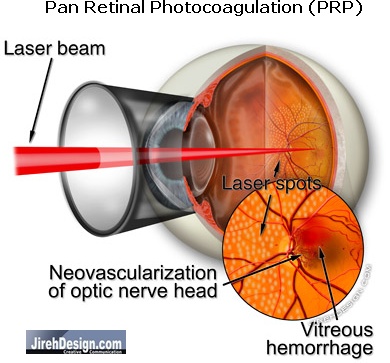 This procedure is also performed in the office.  It can be uncomfortable (actually it can hurt!) and I prefer to numb up the entire eye.  The procedure can take 30-45 minutes.  It make take several weeks to determine if enough laser is performed.  It is not uncommon for 1000 pulses or more to be required.

If performed timely, this potentially blinding phase of the disease can be halted!