…and Often the Patient Wins

…and Often the Patient Wins 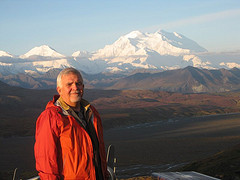 Many times our medical treatments and eye surgery work well and the patient “wins.”  Last post I wrote “Sometimes the Disease Wins” where I shared the disappointment and frustration of unexpected surgical results, highlighting the fact that surgical results are not guaranteed.

A patient of mine, JF, just returned from Alaska (see pic).  He and his wife spent 8 days touring by land and sea.  He just sent me a collection of his photos of his trip.

JF and I have known each other for about 15 years or so.  I first met him when I started working in Baltimore…for his first retinal detachment.  He now sees me in Fairfax, VA where I’ve been in practice for about 7 years.

Often, the patient does win.

JF has had undergone every procedure known to fix a retinal detachment.  He has had;

In addition, he has had cataract surgery to both eyes, too.

What Does This Mean?  This means that we do have many tools in our arsenal to repair retinal detachments.  This means, more often than not, we “win” over the disease.  While not all results are as miraculous as JF’s, they are not uncommon.

This also means we don’t stop trying because more times than not, the patient does win.

The other message is the value of patient education.  Over the years, despite the odds of recurrent retinal detachment, JF never ignored the clear signs and symptoms of a developing problem.  In many ways, he was more instrumental in saving his sight than me.  He learned what to worry about.

The last tribute to JF is that he never gave up hope…and in my opinion, this is the key to the patient “winning.”