How to Diagnose Macular Degeneration

Jack LaLanne, exercise and nutrition fanatic, died last week at 96 years. What can he teach us about how we approach our own health and eyesight? 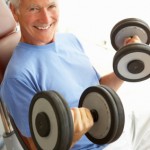 What can we learn from Jack LaLanne and how we prevent macular degeneration?

Jack LaLanne, the pioneer of diet and exercise died this week.  He was 96 years old.  He was a chiropractor, fitness and diet expert, bodybuilder, weightlifter and was best known for his fitness television show aired from 1951 to 1985.

Jack was an exercise fanatic, working out 2 hours every morning, followed by a rather regimented two meals a day consisting of hard-boiled egg whites, broth, oatmeal, soy and fruit.  He ate lots of fish and did not drink coffee.

Long before diet and exercise were popular, LaLanne promoted the benefits of leading a healthy life and did so by leading by example.

Jack LaLanne’s European Health Spas eventually became Bally Total Fitness.  He is responsible for the “power of juice” coined to promote what is now the Power Juicer.

What Does This Mean? You can’t help but associate Jack LaLanne with exercise, nutrition and longevity.

Was it the exercise, good nutrition or both that led to his longevity?  You might be right if you think so.

But we don’t really know that.

It could be that the LaLanne family has a great “longevity” gene and that Jack might have lived just as long had he never exercised, smoked and drank.  We don’t really know that either.  (It seems as though his mother did live to near 90 and his brother lived to be 97.)

As in Mr. LaLanne’s case, there are many variables that could have caused his longevity.

The same is true with diet and eyesight…particularly macular degeneration.  We don’t really know if diet, or vitamins, really have an impact on our vision.  There are too many variables for us to know for sure.

Part of the job of good science is to create a hypothesis.  Does variable ‘x’ cause a particular result?  For instance, does lutein help macular degeneration?  Will Omega-3 fatty acids save our sight?

Testing the hypothesis is even harder.  Ideally you want to keep all variables the same, except for the one variation that you are testing.  In a perfect world, you’d be doing all your testing on clones.  All have the same exact DNA and the only variable would be the change in diet…feeding them only fatty acids or lutein.

For now, the best we can do is to perform our testing on huge numbers of people.  As with the LaLanne family, there are too many variables that could effect the same outcome.

The AREDS II study will be completed in a few years.  It is a large study designed to determine if certain supplements such as lutein and omega 3 fatty acids are beneficial to our health and sight.

For now, you have to make your own choices based upon little credible evidence.  Read carefully, there is lots of misleading stuff out there.  As with Mr. LaLanne, don’t get swayed by emotion.  Your doctors can give you some guidance, but look for proof.

In the end, you have you have to make up your own mind.  For me, I do believe diet and exercise are beneficial and will only help you maximize your genetic potential.