What is a Fluorescein Angiogram? 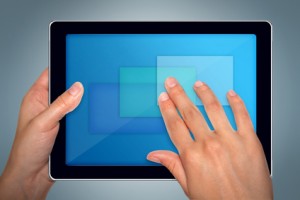 My patient, Dick Marquis, has had wet macular degeneration affect both eyes.  While now legally blind, the iPad has allowed him to remain as functional as possible.  I asked him to write this article to serve as an inspiration to others. – Randy

Before Wet Age Related Macular Degeneration (Wet ARMD) struck me, I was an avid reader. My morning ritual was coffee and the Washington Post. I read novels, professional papers, scientific articles, newspapers, magazines, travel guides, whatever.

My left eye went wet first. My right eye, thus far, was unaffected, so I was still able to read well enough without special help.

About two years later, wet struck my right eye. The effect was mild at first but I was no longer able to read normal print. I was able to obtain “large print” novels at the local library and although this slowed me down, I was still able to read books. Not much else is available in large print but my iMAC, with its zoom feature, provided continued access via the internet to many of the same things as before W-ARMD took hold. But reading in front of the computer for any length of time proved to be too uncomfortable.

Soon vision in my right eye deteriorated and I was no longer able to read large print text.

Enter the iPad. Many Apple applications allow adjustments to larger fixed print sizes, and beyond that, this “reader” possesses its own internal zoom capability that permits enlargement to an almost infinite degree. You can set the zoom level to fit your particular needs and read anything accessible from the internet.

Books, newspapers, magazines, maps, most any app, emails, whatever. The screen is backlit so you can read in low light and in darkness easily. One negative with Apple is glare. Outdoors or in bright light, screen glare can be quite bothersome.

Amazon and the iTunes store are two of many web sites where iPad content is available, some free, most purchasable at reasonable prices. Many other sites are available for direct access, including most magazines and newspapers, and almost anything else on your reading list.

Additionally, the this tablet is mobile so you can take it most anywhere. Once you download an item into iPad’s memory, it goes wherever the iPad and you go.

Amazon’s Kindle is another handy device for portable e-reading. It has several fixed font sizes available but no zoom capability. It is smaller than the iPad so it’s a bit more portable. The latest model (Kindle Fire) has many of the same capabilities as the Apple version.

You can buy books for your Kindle on the Amazon web site and, if you have the free Kindle app installed on your iPad, the two devices will sync automatically and the item appears on both devices.

You can also download newspapers and magazines for the Kindle just as you can for the iPad. Kindle’s screen is smaller than the iPad, which is a negative for me since I have to enlarge the print to be able to read, making text lines shorter and more awkward to handle on the Kindle. But it’s cheaper than the iPad and there is no glare with its screen. Its presentation is said to be “eye sensitive” and easier on light-sensitive eyes.

I prefer the iPad over the others mainly because of its larger screen and its zoom feature, and despite the inconvenience of occasional screen glare. Your iPad won’t do well for you at the beach whereas the Kindle Fire will be fine.

So while ARMD can be debilitating, so long as you maintain a sliver of vision, the iPad or the Kindle or the Nook may help you with keeping in touch with the rest of the world.