What is an Epiretinal Membrane or Macular Pucker? 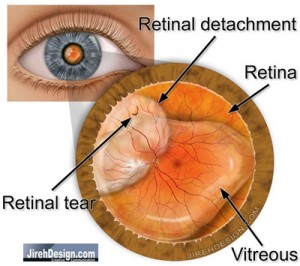 Most retinal detachments do not require emergency surgery.  I operated this Saturday morning, however, to repair a retinal detachment for a patient who should not wait through the weekend for the operation.  In this case it was an “emergency.”

Often, as with my patient (RR), there is a history of flashes and/or floaters preceding eventual loss of vision.  RR had some vague symptoms over the past two weeks, but did not become too concerned until he started to lose some of his peripheral vision.

His central vision was unaffected.  He could see well at distance, read and watch TV, but objects located down and to the right in his peripheral vision were missing…and it was getting worse.

“Macula On, Superior Off” Retinal Detachment

There are really only two emergencies faced by a retinal surgeon.  Endophthalmitis, or infection inside the eye is the most devastating and is the biggest eye emergency.

A retinal detachment not including the macula, but is in danger of detaching the macula is a relative emergency.  Fluid located “above” or “superior to” could shift downward, thus detaching this crucial area and decreasing central vision.

In the diagram, the macula (small brown spot in the center of the picture) is still attached. If the area of retinal detachment were to enlarge, the macula might become affected.  Central vision would be lost and permanent visual loss is possible.

Fluid underneath the retina often obeys the laws of physics…and moves with gravity.

The Decision to Operate is Based on Attachment of the Macula

The timing of retinal detachment surgery is basically determined by the state of the macula.  There are three possibilities;

Situations where the macula is already detached or where the macula is unlikely to detach in the near future can be usually scheduled for surgery during normal “operating” hours and avoid the pitfalls of emergency surgery.
In this one instance, where the macula is still attached,  but is likely to detach with waiting…surgery should be performed.
What Does This Mean?
There is only one true “emergency” retinal detachment.  If the macula is already detached, surgery can be scheduled within 10-14 days and is not a genuine emergency.
Too many doctors will tell you differently and is based on competition in the area and their personal schedules.  Too often, doctors cram their daily schedules so tightly that there are no opportunities to operate during normal times, and thus, deem every retinal detachment an emergency.
Emergency surgery may be necessary, but often is not the best option although it “sounds” intuitive.  In my opinion, emergency retinal detachment surgery is overplayed…and at the expense of the patient.  I’ll write soon about the disadvantages to emergency eye surgery.