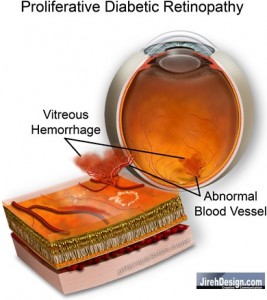 There are two times when a patient needs vitrectomy eye surgery for diabetic retinopathy.  Patients with either a vitreous hemorrhage and/or a diabetic retinal detachment will require a vitrectomy.

What is Proliferative Diabetic Retinopathy

Neovascularization, the abnormal blood vessels, is very fragile.  These delicate blood vessels have grown somewhere inside the eye; usually on the surface of the retina.

At times, these delicate blood vessels may bleed and cause a vitreous hemorrhage.  Blood accumulates inside the eye and blocks the vision.  Patients can’t see “out” and doctors can’t see “in.”

Though the vision loss can be dramatic, and as long as nothing else could have caused the bleeding (i.e. a retinal tear can also cause a vitreous hemorrhage), we usually wait for the blood to clear.  This may take several weeks or longer.

If the blood doesn’t clear, a vitrectomy is needed to remove the blood not absorbed by mother nature.

Untreated neovascular tissue may “proliferate” or grow inside the eye.  The tissue may creep along the surface of the retina much the same way ivy grows along the ground…moving slowly from one point to another.

A retinal detachment caused by diabetes requires vitrectomy surgery to physically cut away or remove the offending tissue pulling up on the retina.

In both cases, laser treatment (panretinal photocoagulation or PRP) is needed to stop the neovascularization.

For patients with a diabetic retinal detachment; however, an operation is often the best and only choice.

With routine eye examination, the neovascular tissue is often detected before bleeding or retinal detachment has occurred.  Treatment can be initiated, operations avoided, and vision preserved!