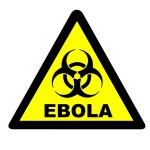 I knew nothing about Ebola.  After researching for this article, I am now less ignorant.

Ebola is foreign to both the American public and American docs, because until recently, it was never diagnosed in the United States.  While it has no direct eye involvement, I still wanted to learn more about this often fatal disease and to lessen my ignorance when asked basic questions about Ebola from friends, family and patients.

I hope this will make your own Ebola discussions more meaningful.

The sickness is caused by a virus originally discovered along the Ebola River.  There are 5 types of Ebola virus, only four of which cause infection in humans.  A 5th type has been found in the Philippines (Reston), but does not infect humans.

The four different strains can cause a severe and often fatal type of hemorrhagic fever in humans though the natural hosts are likely to be fruit bats.  The disease enters the human population by contact with the blood, secretions, organs and other bodily fluids of dead or sickened animals found in the wild; chimpanzees, gorillas, fruit bats, monkeys, etc.

Recent outbreaks have occurred in Sierra Leone, Guinea and Liberia.

Problem:  Viruses, like the common cold, cant’ be cured with antibiotics.  There is no known antiviral drug which works against Ebola.