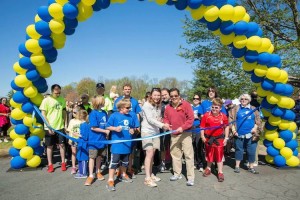 We had perfect weather (even by Washington, D.C. standards) for our event.  Over 400 people participated to celebrate our fundraising goal of $140,000.

You can still donate through June 30.

Over 3 dozen teams participated.  “Team Wong” was small, but supercharged.  Most teams are formed around a friend or family member afflicted with a retinal degenerative disease.

There are 51 chapters around the USA.  I chaired the northern Virginia chapter this year and have already pledged to repeat for 2015.

Team Wong met at Whole Foods in Alexandria for breakfast and to get organized.  The group leader (RVW) was a little slack and was not able to order shirts, but elected to adorn all walkers on his team with a red and yellow tulip.  This may be repeated next year!.  A special thanks to Andrea who helped fashion our “team” boutonnieres!

After breakfast, Team Wong migrated to the park to get organized.  We were overwhelmed by the numbers of people and size of some of the groups.

I was worried morale would be crushed by lack of T-shirts.

My speech was short.  I applauded the organizers; especially Heather Medina, Ms. Sumers and Davida.  I charged everyone with closing the gap between those with disease and the researchers; a feat now possible due to digital communications.

Davida’s daughter also has Retinitis Pigmentosa.  She and I cut the ribbon to begin the 3.5 mile walk around the park (see pic above).

It wasn’t a walk-a-thon, it was an event to acknowledge our commitment, and yours, to helping find cures to retinal degenerative disease.  VisionWalk is one of two signature events of Foundation Fighting Blindness to raise money for research for retinal diseases.

“Dine in the Dark” is the second major fundraising activity.

Since I first accepted the medical chair for the northern Virginia, I have been moved by the energy and dedication of this particular group.

The pace of retinal research is breathtaking.  Just 20 years ago we had no idea how to treat macular degeneration.  Now, treatment for wet ARMD seems “routine.”

My guess is that this will become the norm for more retinal degenerative diseases such as Stargardt’s, Usher’s and more.  Better yet, I think this will happen before the next generation.

The ability to communicate with one another and form relationships without ever actually shaking hands is now easier than ever.  Patients now have the ability to put a “face” to the  “name” of diseases so that researchers can make their work even more meaningful.  Digital communication, blogs and social media translate to more aware of disease and FFB.

In addition to funding, digital communication has the potential to be a catalyst for new discoveries and cures for retinal diseases.