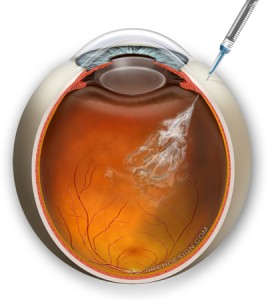 Over the past few years, I have written many articles about various new ways to treat DME.  Here’s a review of the most current ways to treat this common complication of diabetic retinopathy.

This has been the “gold-standard” for treatment, that is, this is the treatment by which all others have been compared.  Laser photocoagulation, or laser treatment, was first used in the late 1970’s and was the first treatment for diabetic retinopathy.

Laser treatment works best when there are easily defined areas of leakage and the “leaks” are easy to see by fluorescein angiography.

Laser treatment works less well when there is diffuse thickening, but without obvious focal areas of leakage.  Laser treatment can not be performed when the areas requiring treatment are located in the central macula.

These are a group of drugs which work very similar to each other.  The are known as anti-VEGF drugs because they block the effects of Vascular Endothelial Growth Factor.  VEGF is implicated in many types of retinal swelling and also in wet macular degeneration.

Both Lucentis and Eylea are FDA approved for treating diabetic macular edema.

Intraocular steroids, such as Kenalog, have been injected into the vitreous to help control diabetic macular edema.

Ozurdex, a sustained release steroid delivery system, has also been FDA approved for the treatment of diabetic macular edema in those who have had cataract surgery or are planning to have cataract surgery.

The device is delivered into the vitreous as an injection and steroid is released into the eye for about 4 months.

With the approval of these newer products, laser treatment is no longer the gold standard for treating macular edema from diabetes.

In addition, we have several methods by which we can “treat” complicated cases, or cases where the swelling is stubborn and doesn’t leave.

There still is a role for each treatment modality.  No single treatment seems to be better than another.  It has become customary, at least in my practice, to usually combine treatments for the best outcomes!

Despite the array of treatments, it is still prudent to get early and regular dilated eye exams to limit the development of DME.