There's a new LONG TERM treatment for patients with diabetic macular edema. Iluvien is now available in the United States. It releases steroid and can improve your macular edema for years! 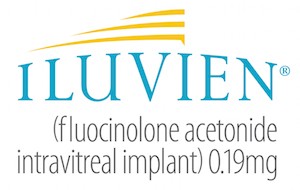 Iluvien is now available in the United States!  Finally receiving FDA approval in late 2014, the injectable sustained release intravitreal implant  is on the market.

Alimera Sciences states that Iluvien (sustained release of fluocinolone) will release its drug for up to 3 years.

Fluid accumulation in or near the center of the macula is called diabetic macular edema (DME).  This is also known as clinically significant macular edema (CSME) if you are a doctor.

DME often causes blurry vision and in extreme cases can cause legal blindness.

Therapy is aimed at stopping the leakage.  With time, the macular edema may “dry up.”

Iluvien is injected directly into the vitreous.  The sustained release system will release fluocinolone for 3 years.  The actual “pellet” is small enough to fit inside a 25 gauge needle.  It is smaller and thinner than a grain of rice.  You may click on the image to enlarge.

By injecting directly into the eye, as with all intravitreal injections, only small amounts of drug are needed to treat the retina.

The steroid will chemically stop the retinal vessels, affected by the diabetic retinopathy, from leaking.

While intravitreal drug delivery is not novel, the duration of the product is unique.

The economics of this are intriguing.  The practical consequences are even more staggering.  In short, this could mean far fewer trips to the retina specialist for the patient AND the family.  Fewer office visits translates into fewer examinations and testing.